My name is Joshua Myers. I was born 9 weeks pre-mature, which led to Cerebral Palsy and my being confined to a wheelchair since birth.

Cerebral Palsy is a non-contagious motor condition that causes physical disability in human development, primarily within body movement. There are many different levels of Cerebral Palsy; my specific condition is considered spastic quadriplegia – which means that all four of my extremities are affected to varying degrees.

For example, my left side is significantly stronger than my right, which can make even the simplest tasks difficult to complete.

Throughout out my life I have battled much adversity to accomplish things I was told I never would (Tweet Quote on Twitter).

Every accomplishment I have is owed to my mother. Raising a child with a disability (along with an rebellious ‘able-body’ child) isn’t something that’s easy to do, especially considering she did it on her own for a number of years.

Respectably, my mom never used any government assistance programs – she did it on the strength of her own will and work ethic and she raised me to be that same way.

As I grew and became aware of my disability and ways I could be more independent:
• I joined the high school wrestling team and became captain my senior year – while winning only one match during my entire high school career
• After high school, I attended the University of Iowa and watched the Hawkeyes from the stands – at that time they were America’s wrestling dynasty, which meant a lot to me considering my undying love of the sport 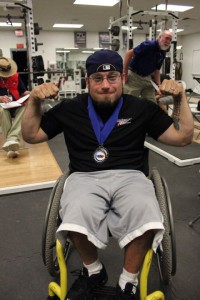 I wasn’t going to wrestle in college, but I had the need to excel at something on my own. It wasn’t long before I discovered Powerlifting. After 3 months of training I won my first of 5 Cerebral Palsy National titles at the age of 19. I also competed in a World Championship in Nottingham England and currently hold an Amateur Athletic Union (AAU) World Record in bench press.

This led me to dream big and focus on the ambitious goal of making the Paralympics.

Although I was successful in the sport of powerlifting, I would soon learn that to make the Paralympic team, a lifter must finish in the top 8 places in the world at the previous World Championships. This makes it nearly impossible for someone with my level of Cerebral Palsy to make a Paralympic squad; yet again, more adversity to overcome.

Considering I have never quit anything in my life, I wasn’t about to quit trying to make a Paralympic team. In fact, I decided to up the ante, and move our family to Phoenix (where we lived for three years before moving back to our home state of Wisconsin) which allowed for ample training conditions.

It was there that I discovered the sport that would give me the best shot at qualifying for the Paralympics – shot put & discus in the category of track and field. In this sport, the disabilities are separated into classes. For the first time in my life I will get to compete on an equal playing field! 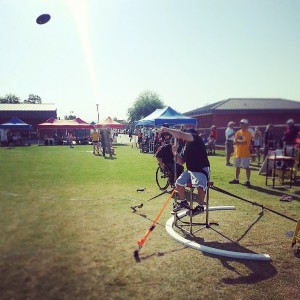 Since learning of this adaptive sport in 2010, I have competed in 3 regional events throwing the shot put and discus, placing first in both events each of the three years.

With every competition there are costs involved and even as a college graduate and Fortune 1000 employee with a full-time job, it’s a struggle to support my family and pay for my training and travel expenses on my own.

I learned early on that competing as a disabled adult athlete and trying to obtain sponsorship would be difficult as it seems that most corporations perceive disabled sports as less-marketable and aren’t as willing to take a “risk” on their investment – though, if there is a corporate sponsor out there to prove me wrong, please do so!

Anyhow, I put my passion for fitness and training together and attended classes to become a Certified Personal Trainer. I also developed my own fitness nutrition website where I provide supplements and inspiring / entertaining blog posts to my clients. JMFitnessNutrition.com is one way I try to combat the financial struggles of training to be a Paralympic athlete, along with the financial realities of fatherhood.

When I was asked to guest blog for the Make a Hero website at first I was a bit puzzled – I don’t see myself as a hero, just simply a man trying to maximize life.

Though, in looking at the current state of some of today’s mainstream athletes (Aaron Hernandez and his murder trial, Lolo Jones making a public mockery of the “small” paycheck she received to participate in Olympic training – just a couple of names and situations that come to mind), it seems our society is in need of more people who can lift the human spirit and make the world a better place.

If I can print a few words on a page and that turns into inspiration for just one person who may not have otherwise been inspired to change his or her life, then I am happy to write with this intent.

In closing, even if you don’t view me as a hero, I hope I’ve helped you look passed the mainstream to other individuals or groups that battle through adversity on a daily basis in an attempt to turn big dreams into reality.

My definition of a hero is someone who acts courageously or nobly despite obstacles placed in his or her way. My mom is my biggest hero; I wouldn’t be who I am without her.

I also look up to other disabled athletes like Anthony Robles

But a close second to my mom would be the men and women who serve in our Armed Forces like Jesse Murphree.

Freedom isn’t free. I am grateful for the men and women serving our country to keep our families safe, allowing us ‘Live Life to the Max‘!

What is your definition of a HERO?

Who do you consider to be your HERO?

Thank you for giving your time, energy, and financial support to adaptive athletics through organizations like Make A Hero, as well as my cause, and for simply reading this blog post – thanks in advance for any comments, or shares of this post through the social media sidebar over there on your left 🙂

Please help us spread the word about Joshua Myers, the Make A Hero Cast, and everyday heroes, by sharing this post through the social media buttons on this page, learning how you can Make A Hero, subscribing to The HERO Newsletter, and / or giving a generous monetary donation.  Thank you! ***