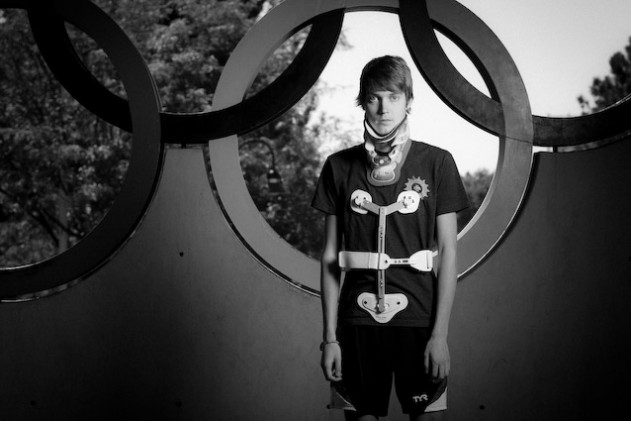 I’m Lukas Verzbicas and the following story is my Guest Authored Blog Post for The HERO Blog of Make A Hero:

In reflecting upon the day before that day – which seems to have been filled with warning signs, foreshadowing the severity of the events that, like the gears of my bike, would cause a major shift in my life – I now realize that statement as truth.

I was on my way back home from Chicago leaving for a new training cycle at the Olympic Training Center in Colorado Springs. On my way to Midway Airport I remember hitting almost every stop light, and was starting to get nervous, worrying that I might miss my flight.

I arrived only to find my flight to Denver delayed twice before finally departing, once before boarding and once after. The presence of big storms over Denver, caused the plane to shake as the pilot prepared to land, and a field of tension radiated from the passengers around me, as the plane descended on the wet ground.

Later I hopped into my car and drove through what was the biggest storm I’ve ever driven. Just before entering Colorado Springs I got into heavy traffic due to a car accident.

I recall passing by the wreckage with ambulances and fire trucks abound, not paying any attention to the victims, sadly as is often the case when we’re stuck in traffic awaiting our destination, it seemed like no big deal to me at the time.

I went to bed that night peacefully, though anxious, ready to start up training the following morning which was to be a bike ride at Garden of the Gods National Park.

In the morning I remember driving with my father (who was also my coach at the time) to the Park, discussing my future athletic endeavors – primarily how I would win a Gold Medal in 4 years at the Rio 2016 Olympic Games.

It was a very exciting mood we were both in. Once we arrived, we started to get my bike ready to ride, and the other athletes we were awaiting took unusually long to join us; they said they had also been stuck at almost every red light along the way.

Before our group of four riders took off, my dad explained the workout: 5 loops around the park, nice and easy, just to get the feel of the bike and to still feel fresh for the rest of the day. That was all.  It sounded simple enough. 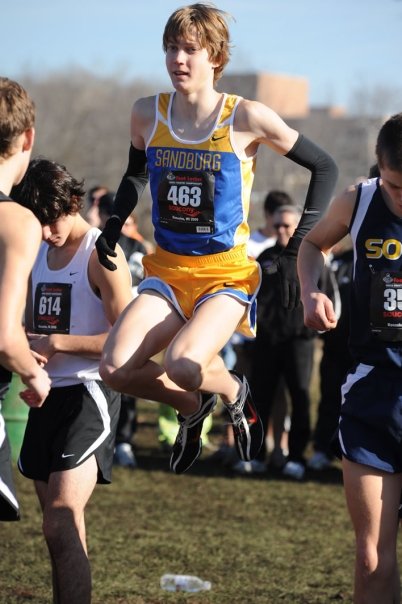 Once we started out, I rode a lap together with the group until my competitive spirit took over and I took off ahead of all but one other rider who kept up with me, as we moved along in tandem.

I remember feeling great – sort of like I was on a ‘runner’s high’ – every time a hill came up, I would stand up and start grinding away and feel as if I was dancing on my pedals; the pain just couldn’t match all those positive endorphins flowing through me.

Then the last lap started and I thought, “this is where I’ll drop the rider still hanging with me” … and so I put my bike in a higher gear and started to pump my legs faster and faster.

I started gapping him, until I approached a big descent with a 180 degree turn, on a decline.

I went faster than before because I trusted myself and my bike to execute the turn, regardless of the higher speed. Except this wasn’t the case.

As I was making the turn, I realized the road wasn’t wide enough for me to keep riding at my current speed.

I hit my brakes.

But as I was riding at over 25 mph, that speed was too much to slow down my bike; it was too late.

All I remember seeing was a guardrail in front of me. And then, as I inched closer and closer to it, time seemed to move slower … and slower.

It was at that moment that I started seeing in tunnel vision (which was something I’ve experienced only during some of the most difficult and fastest of my races, particularly near the finish line).

It was like my life flashed before me in a sense that I can only describe as feeling some of the biggest emotions I’ve felt over my life within those last few seconds, before I crashed.

And then all I remember hearing was a big loud “Bang!”

And there I was.  On my back looking towards the sky – the sun glaring deep into my eyes.

I must have gone in a state of shock because for the first few seconds I didn’t feel anything. I tried getting up but only went a few inches before I felt as if something slammed me back down on the ground.

Then the pain came when I started breathing; I could barely take a breath at all. That was the scariest part at the time.

My father was riding in a car a couple hundred meters behind and once he saw me he called the ambulance, right away.

After that I don’t remember much as I was out to sleep and on morphine most of the day. I woke up in the evening to sign a few forms saying I must be rushed into surgery and there’s around 33% chance of fatality (which I didn’t pay much attention to).

The X-rays revealed I had a broken spine from thoracic 4-6 and cervical 7 vertebrae, 6 broken ribs, collapsed right lung, and a broken right collarbone. 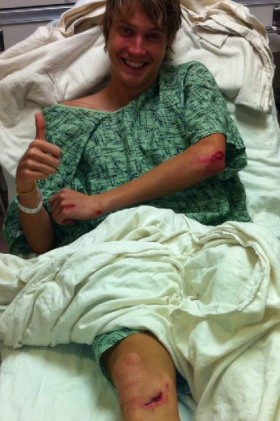 I woke up the following evening with my mother beside me saying the surgery was a success – I had spinal fusion that took 6 hours and 7 different blood transfusions.

The next morning I woke up again and tried moving my legs but I could not.

The surgeons told my parents I would most likely not walk (… thankfully they never said it to me and it never crossed my mind).

My left leg was weak, but within a few minutes I was able to start moving it with limited range of motion. But my right leg, however, was completely paralyzed.

It was like that for two weeks until the day before I had to go into surgery on my collarbone.

It was then that my mother said she needed to get away from the hospital to clear her head. She went to climb Pikes Peak one of the highest mountains in the country up 14,200 feet. She brought with her a few empty bottles and at the top filled them with the spring water.

The following day before I went into my second surgery she made me drink all that water. Miraculously, moments before they took me to surgery, I had a little twitch in my right leg!

It was from that moment on that I began to heal. We like to think the water up on that mountain must have some healing properties.

From then on, more and more functionality has returned to my legs.  Since that day, I have gone from siting in a wheelchair, to taking my first few steps, to eventually starting to jog. 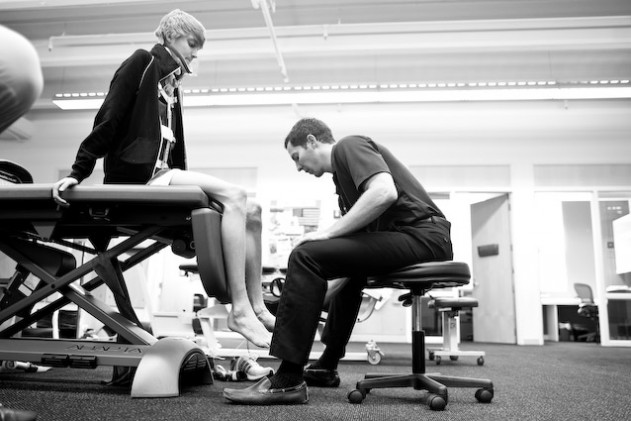 Intensive rehab followed, which was very frustrating, as I did not see improvements immediately.

I was committed to setting daily goals for myself, which my athlete mindset helped me stay focused on, as I was, and still am, determined not to give up.

Now, I am back training towards my Olympic goal, once again, and I’m at around 85% of where I was before my injury.

Through it all, my dream since I was a little kid was to become a gold medalist.  And I am inching towards my goal of Rio 2016, un-wavered, and back on track, now with an even deeper internal sense of power and determination.

Through my journey, I have gained more mental strength than I previously could have imagined.  I’ve learned very important life lessons and am so much more intuitive now. In a way, I am thankful and grateful for everything I went through because I believe everything in life happens for a reason – “there are no accidents”.

Through this I hope to not only change myself for the better but to show others that they can overcome, as well.

What have you learned from overcoming personal adversity?

Has it made you a stronger person, and if so, how?

Thank you for commenting below, Following Lukas Verzbicas on Twitter, sharing the stories of heroes who inspire you through social media buttons on the sidebar of this page, as well as for providing generous financial support –> to sustain the mission of Make A Hero!

Please help us spread the word about Lukas Verzbicas, the Make A Hero Cast, and everyday heroes, by sharing this post through the social media buttons on this page, learning how you can Make A Hero, subscribing to The HERO Newsletter, and / or giving a generous monetary donation.  Thank you! ***