Chris Waddell – The Movement: One Man Joins An Uprising

“Its not what happens to you. It’s what you do with 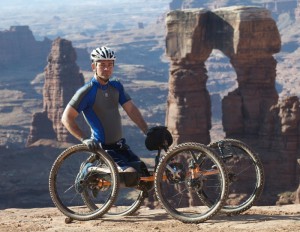 what happens to you.”

The following is the second edition of the Friday feature blog of inspiring heroes that have supported Make A Hero. This week we are featuring Mr. Chris Waddell from ‘The Movement‘: One Man Joins An Uprising with a biography according to his website:

“Chris Waddell always thought that the lessons he learned in sports would provide the foundation for later success. As a ski racer at Middlebury College in 1988, he had no idea how profoundly one moment could change and paradoxically enhance that conviction. 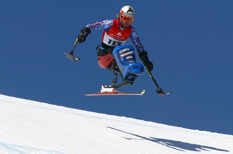 On December 20th his ski popped off in the middle of a turn. He fell, broke two vertebrae, and damaged his spinal cord. Paralyzed from the waist down he learned and achieved more than he could have imagined.

He returned to college just two months after the accident, started monoskiing in less than a year and was named to the US Disabled Ski Team a little more than two years experience. With 12 Paralympic medals, he became the most decorated male monoskier in history. Also a track athlete, he’s one of a handful to have won World Championships in both the winter and the summer.

Waddell was inducted into the US Ski and Snowboard Hall of Fame and the Paralympics Hall of Fame. The Dalai Lama honored him as an “Unsung Hero of Compassion”. People Magazine named him one of the “Fifty Most Beautiful People in the World”. Skiing Magazine placed him amongst the “25 Greatest Skiers in North America”. Middlebury College presented him with a Doctorate in Humane Letters. 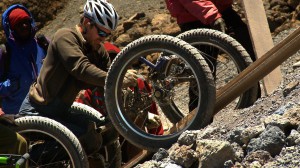 In September of 2009 Waddell became the first paraplegic to summit Mt. Kilimanjaro almost entirely under his own power. His team carried him for approximately 100 feet of the 19,340 mountain. The film documenting the climb has won awards throughout the world. He has appeared on Dateline, Oprah and 20/20.

Currently Waddell resides in Park City, Utah where he can be seen out and about keeping fit on his hand cycle and racer. He travels the country year round presenting the Foundation’s Nametags school program, speaking to corporate groups and screening the documentary. Waddell is working on a book to chronicle his journey while also planning his newest adventure – a cross-country bike tour to highlight the foundation. He also continues to be actively involved with the Paralympics as an ambassador for the International Paralympic Committee and is a color analyst for the Games.”

Mr. Waddell’s message resonates in his role in Make A Hero’s first film, ‘The Movement: One Man Joins An Uprising‘ where he and a cast of inspiring individuals, such as Jim Martinson, act as mentors for Rick Finkelstein, as he attempts to get back on the mountain that changed his life forever.

Chris truly personifies the heart and passion it takes to not only live with a disability but to overcome an obstacle and create a path for individuals like him that must keep engaging in life. Make A Hero would like to thank Chris for his support and for paving the way for other individuals, whether Paralympic hopefuls or recreational participants, to regain their freedom and mobility.

To learn more about our heroes like Joshua Myers and Jesse Murphree or to learn how your donation can benefit Make A Hero’s mission of enabling individuals with disabilities to engage in sports and recreation, please click here.

‘The Movement‘ trailer linked to here …

What do you believe to be Mr. Waddell’s most impressive achievement?

Please share your thoughts in the ‘comments’ section below …

Please help us spread the word about Chris Wadell, the Make A Hero Cast, and everyday heroes, by sharing this post through the social media buttons on this page, learning how you can Make A Hero, subscribing to The HERO Newsletter, and / or giving a generous monetary donation.  Thank you! ***