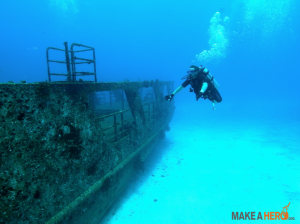 Jesse Murphree Scuba Diving in Cozumel, Mexico
during production of ‘The Current’.

While serving in the US military in the Korengal Valley, Afghanistan, also known as the “Valley of Death” amongst American forces, Corporal Jesse Murphree’s life was changed forever on December 27, 2007.

While stopping with his comrade to turn around one of their cars, he recalls “mid-sentence of talking to my buddy… I heard kind of like, I thought it was an electric switch…I guess, I got blown up and thrown down the side of a mountain.”

Catching a glimpse of the top of the mountains from the helicopter as he was being evacuated, the next thing he remembered was waking up a week-and-a-half later in Washington, D.C.

Murphree underwent a total of 50+ surgeries, including dual-leg amputations above the knees and reconstructive surgery on his arm—technically dying six times throughout the process. 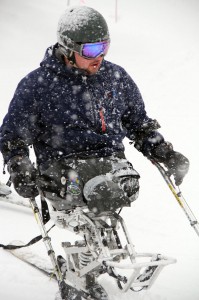 His body might not have been the same from before his tour in Afghanistan, but his spirit and passion to enjoy the freedom of sports and recreation remained.

In January of 2012, after this moving story was submitted to a contest, hosted by Denver radio station KBCO, Jesse won a trip to the Sundance Film Festival with the directors of Make a Hero to attend the premiere of the organization’s first film, “The Movement: One Man Joins an Uprising.“

Make A Hero worked with Jesse through the production of the film, to get back on the slopes and re-learn how to ski. When asked about the experience, Murphree states that “Make a Hero brought something back into my life that I thought I lost forever”, and that “Make a Hero gave me back my confidence, which helped me regain my sense of freedom.”

In learning how to ski again, Jesse was able to attain a piece of mind that had been lost after his accident. He was even able to ski with his childhood friend Nate, once again.

Corporal Jesse Murphree believes that the definition of a hero is “just someone to look up to…when you hear the word ‘hero,’ I’m thinking of someone that’s out there giving everything.” 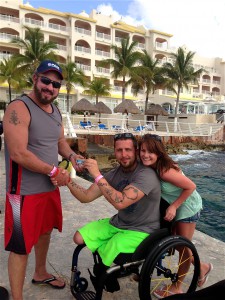 Jesse is a hero under his own terms. In spite of a traumatic, potentially life-changing accident, he returned home determined to resume the life he left behind and thought he might have lost. He did not allow any obstacles to deter him and, piece-by-piece, he began to rebuild himself.

After learning to ski again, Jesse is particularly excited to be featured in Make a Hero’s second production, “The Current“, which will be released Fall 2013. Happily, Jesse’s girlfriend accepted his proposal, while filming on location in Bimini, Bahama!

In this film, Jesse will learn to scuba dive and snorkel as he explores the healing powers of the ocean. Other adaptive athletes such as Bethany Hamilton, Paralympic medalist Mallory Weggemann, and ESPY winner Anthony Robles as well as, Athlete Ambassador Missy Franklin, and Ocean Environmentalist Jean-Michel Cousteau, will join him.

Visit Jesse Murphree’s fundraising page to see more of his story and to learn how you can help gift Corporal Murphree with a K-9 service dog.

What aspect of Jesse’s story did you find to be most inspiring?

Please help us spread the word about Jesse Murphree, the Make A Hero Cast, and everyday heroes, by sharing this post through the social media buttons on this page, learning how you can Make A Hero, subscribing to The HERO Newsletter, and / or giving a generous monetary donation.  Thank you! ***